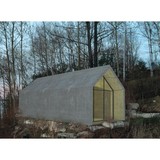 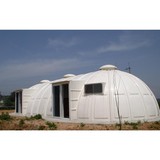 We at geotec Company, located in South Korea, offer one of the most efficient building solutions that exist today, known as the geodome and geocabin

As you may have noticed from the name, a geodome is a dome shaped housing solution made of FRP (Fiberglass Reinforced Plastics) that can be assembled in less than a day, with significantly low costs, but nevertheless lasts for 50 years.

Patented under the Korean Intellectual Property Office and certified by the Ministry of Commerce, Industry & Energy of Korea, we have already engaged with multiple buyers ranging from multiple recreational centers, camping facilities and housings in Korea, to even the Russian Military,

Also, we now produce a geocabins made of wooden OSB panels which have many superior features.

They include door, window and electrical conduit boxes to ensure the quality of construction while drastically reducing the time involved.

This panel system is completely structural and can substitute for conventional framing in most applications.

Our products (geodome and geocabin) are a multi-purpose building suitable for many usages, such as

You can verify sungwon Jung using your contacts and professional networks.